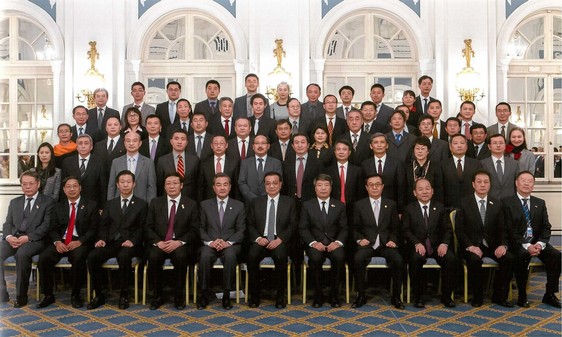 Mr Wang of Green's Germany (photo: fourth row, second from right) takes a look back at his meeting with Prime Minister Li Keqiang and several business men and women from his home-country.

Prime Minister of China Li Keqiang paid a visit to Germany on an invitation from Germany's Chancellor Angela Merkel to attend the ?amburg summit: China meets Europe," which took place from October 9-11, 2014.  The conference brought together representatives of Chinese enterprises and Chinese entrepreneurs with German and European executives. General manager Lei Wang of Green's Germany, as well as many other German-based Chinese companies had the opportunity to meet the Prime Minister and exchange a few words about their goals and expectations for the upcoming years.
Mr Wang of Green's Germany is very honored to have been able to participate in this symposium and is fully committed in expanding the Chinese agricultural market to Europe. Wang is committed to further expanding the tradition of the Chinese culture alongside Premier Li Keqiang, and is very proud to be able to represent his country here in Europe.

The event was a success bringing together good ideas and high-hopes. Among other important guests were the Director of the National Development and Reform Commission Xu Shaoshi, Minister of Commerce Gao Hucheng, Research Office of the State Council Director Ningji Zhe, and China's ambassador to Germany Shi Mingde, all of whom were supportive of  fellow Chinese entrepreneurs, and we expect to continue to make persistent efforts to contribute to the China-EU economic cooperation.